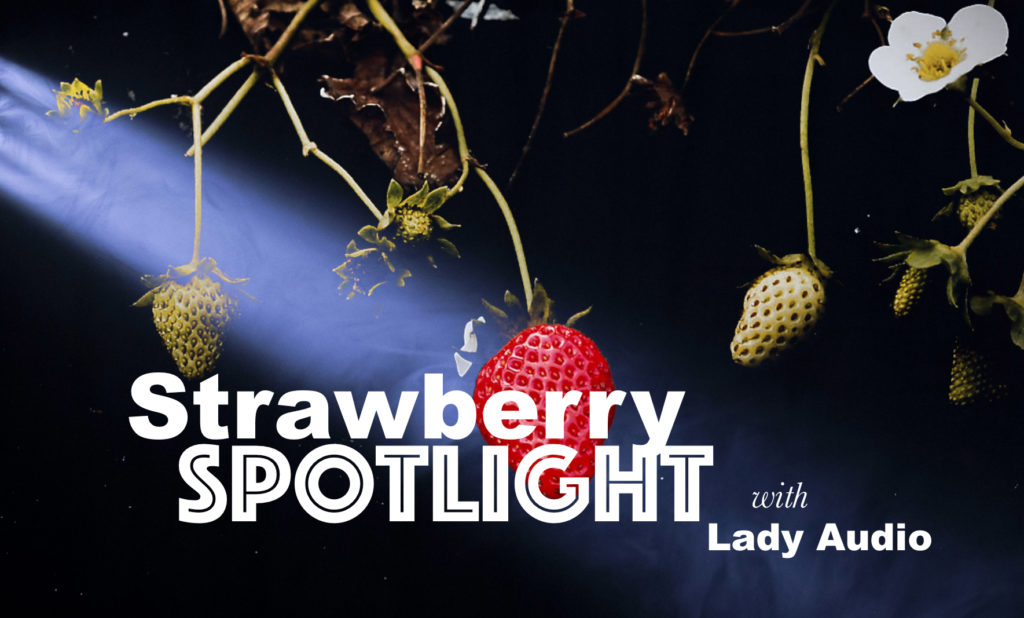 This is a transcription of that interview which airs January 25, 2017, 1:00 EST, only on Strawberry Tongue Radio. You can also catch the re-broadcast of this show on Saturday and Sunday at 1:00pm EST. Be sure to tune in! 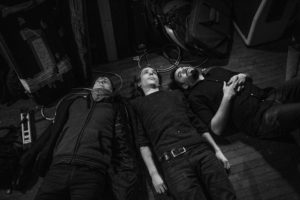 Lady Audio: My first question is, what attracted you to the realm of music?

Dean Tzenos: Wow, okay. That goes way back. I think it’s just I wasn’t very good at sports, really, so, when you’re a kid and your parents try to put you in a bunch of stuff. The only thing that clicked was that I found I was into music. I asked my parents if I could learn guitar. I think I started when I was nine years old. My sisters were really into a lot of cool underground, new wave music at the time. So I kinda got to hear all that stuff early on, so that kind of got me into it as well.

Lady Audio: Cool. Who are the members of the band and what do they play?

Lady Audio: I read that you record, mix and master your own music and that’s a lot of work. So, how long did it take you to complete your latest album, Post Plague?

Dean Tzenos: It was a long time. We recorded, I think it took us, we were in the studio for about two weeks – three weeks, in Vancouver and then we took all the stuff back home and we started to mix it and then we ended up having to tour. We started playing that stuff live ‘cuz we hadn’t actually played it live yet. We realized a bunch of stuff on the road so then when we came back, we changed a lot of the songs and changed a lot of the samples – so we were mixing for about six months. Then we mastered it (laughs) which is also another headache. We definitely didn’t take the easy route with that record, but we really learned a lot about how to mix and how to make things sound really good and pop and stuff, so that was a good experience for us – I just wish it was shorter.

Lady Audio: What was one of your most frustrating experiences when you were recording and mixing that album?

Dean Tzenos: Just like the – you can do a lot of stuff in the box these days that would have made a lot of stuff easier, but we decided to take this electronic record, that we played it live, off the floor. I don’t know if that was the best idea – but, I think that record is going to sound unique because of that, so I’ll give it that, but that was definitely a very frustrating choice because sometimes the sound quality wasn’t good. It wasn’t always on a click – so – we just ran into so many issues that could have been avoided if we had just done it in the box. But, like I said, I think it gives the record a certain character that it wouldn’t otherwise have.

Lady Audio: Yeah, I definitely think it was worth it to do it that way. So, what was one of your most wonderful experiences when you were recording the album?

Lady Audio: I know, with all that work it must be hard to decide, well, was there anything wonderful happening?

Dean Tzenos: (laughs) I mean, don’t get me wrong. It was fun, but it was also like, torture. I think, probably just going to BC (British Columbia) because we got to hang out with my friend Collin – he also recorded the first couple of records as well. He’s got a studio – he moved it out to Victoria Island, so we were basically in a cottage by the water near a forest, so it was just a really peaceful experience sitting there, smoking weed and just recording the loudest music we could.

Dean Tzenos: Yeah, it was amazing. So, I mean, no regrets there.

Lady Audio: So, what are your favorite genres of music to listen to and which bands or artists do you like? Not necessarily influences, but, I just want to know what you actually listen to.

Dean Tzenos: It’s constantly changing. I really like Herr stopilstein a lot. That’s something we were listening to alot during the recording the record. I try to stay up on as much current music as I can. Sometimes, these days, it gets really really hard because it seems like there is no filter anymore to find new music. I generally come from New Wave and Industrial and stuff. But, I’ve been listening to more current electronic music and techno and stuff like that. Terrence Fixmer, Vessel, Container, Tobacco – who we just came off tour with. So, that’s kind of the vibe we were taking in. Does that answer the question?

Lady Audio: Yeah, that’s great! I really like the song “Nervous.” What’s the story behind that song?

Dean Tzenos: That was kind of how the world is going into this technical age and how they are trying to create this perfect image, but, in that, it’s very fake. I find a lot of people are even being real online about who they are or anything and kind of becomes one dimensional. So, it’s kind of taking about that and how our society is going and how that makes me nervous…

Lady Audio: Who wrote the song?

Dean Tzenos: I did that one mostly.

Lady Audio: Ahh, cool. Another song I really like is “Pencils.” What’s that one about and also wanted to know who’s the female voice on it.

Dean Tzenos: So, Colin Stewart, who recorded the recorded with, his wife is Catherine Caulder and she plays with the New Pornographers. We’ve been friends for a long time. So, I actually went to produce her last record – I didn’t end up using the stuff that we did at the session, which is kind of funny, we made “Pencils” and about four or five other tracks that I would like to get. A year had gone by since I had gone to Vancouver and I was working on what I thought was going to be her record – so I made “Pencils” with her because this was the direction I thought she should go in and she didn’t end up using it. So, I was like, hey man, send me that track! So, that’s kind of how that song happened. I thought it was a good song because I could remember it perfectly a year later. I was like, hey, if you aren’t using it guys, give it to me. So, they sent it back to me and then we finished it off. But, her vocals were already there, ‘cuz she’d done the vocals so I just kind of created the verses around what she had already written for the choruses.

Dean Tzenos: Thanks. Actually, there’s another Vancouver group called Brastronauts that she and Collin had brought in a bunch of guest musicians. So they were just messing around with a bunch of crazy instruments and I was just sitting there sampling it and cutting it up. So that’s how that song came together – there’s a lot of weird electronic brass instruments that they were using. They just played for hours and I just sampled it.

Lady Audio: So, do you have any favorite songs off the album that you like?

Dean Tzenos: I really like “That’s How It Goes” live. That song translates better live than it does on the record, even though I think it sounds good. When you hear it live, it sounds huge. I think that one is kind of a sleeper track on there that I think is really good.

Lady Audio: So, when you are up on stage, who’s where? Are there lights – give me a description of what it’s like.

Dean Tzenos: For this last tour – we always try to do a different setup for every tour. For this last tour we were kind of more influenced by The Beastie Boys – or just like hip hop shows. So, it’s just got this weird blend of live sampling – kind of a live DJ thing – and then live instrumentation – bass and stuff like that. Then we have projections and the light show as well. We kind of have to keep our rig compact for the tours we were on because we were opening for other bands – so you can’t bring a ton of gear. We were trying to figure out stuff we could fly around with as well, so it was kind of practical as well. The cool thing we were able to jump around and move around more on stage whereas before we were bogged down by how much instrumentation we had like a full electronic drum kit and guitars and all this stuff. This was a really fun experience – it was more performance based.

Lady Audio: You mentioned a projector, do you mean like projecting lights or like an actual project with images and stuff?

Lady Audio: Oh, cool. What do you play?

Dean Tzenos: We use a lot of our own visuals, so like, I always cut live video to everything we do. I might release those on YouTube some day. It jsut like our full set with all the visuals.

Lady Audio: That’s cool. I want to get a projector soon for my band. I am waiting to get a used one. They are just so expensive if you want something that’s going to be really bright.

Dean Tzenos: Bright, yeah. That’s what we did.

Lady Audio: Alright, so now it’s time for a scenario. Are you ready?

Dean Tzenos: Oh, I guess so…

Lady Audio: It’s late in the afternoon. The shadows are long and you are standing inside your very own castle. Since you are all alone in your castle, what is something you only do when you are home alone, just being yourself.

Dean Tzenos: That’s when I write music. That’s really how I do it. I just need to be completely along and I just keep writing music.

Lady Audio: So, last but not least, what is your favorite flower?

Dean Tzenos: Favorite flower? I don’t even know. Is a dandelion a flower?

Lady Audio: A dandelion is a flower, yes.

Dean Tzenos: I’ll take that one.

Dean Tzenos: I think they are underrated.

Dean Tzenos: Yeah, which is so cool. I was just watching that show Cosmos. There’s a segment on there about dandelions and how they’ve evolved and how their seeds just spread. They’ll just float over mountains – those little balls. Just the way they are designed…it’s just pretty neat that it’s evolved that way.

Lady Audio: Where can people go to listen to and purchase your music?

Dean Tzenos: You can purchase everything off Bandcamp. I guess it’s on Spotify, iTunes and all that crap, but preferably Bandcamp – for our sake.

Lady Audio: Cool. Thank you so much for joining me today, I really appreciate it.

Dean Tzenos: Yeah, no problem. Thanks for playing our stuff – it’s really awesome that people are picking it up and it’s getting out there. Thank you.

To hear more of Odonis Odonis and to purchase their music, visit their official website.

This entry was posted in Strawberry Spotlight and tagged in odonis odonis.

Strawberry Spotlight is a weekly feature on Strawberry Tongue hosted by Lady Audio. She chats with the bands you hear, here, on Strawberry Tongue. She swims through all the waves – new wave, synthwave, darkwave and jumps along with all the posts – post-punk, post-rock, and post-pop. Watch out, she get all electronica, dreampoppy, and shoegazey, too!