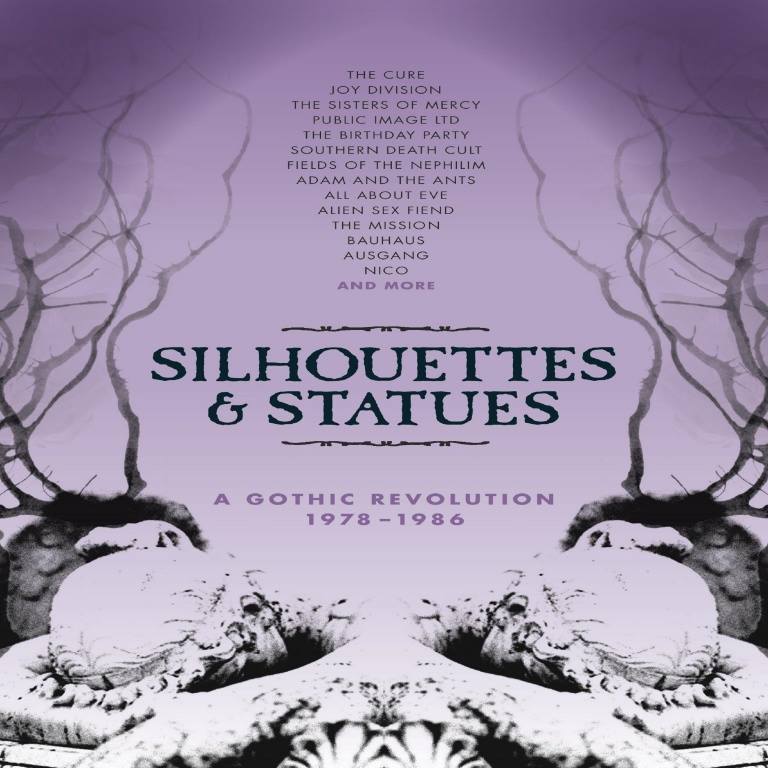 It has been said that during turbulent political times, that some of the most innovative and inspired music and art is created. Worldwide twenty-seventeen has proven to be one of those years. It comes as no surprise that Cherry Red has chosen this year to issue a compilation of music from the late 70’s & early 80’s, a similar time of worldwide political unrest. Entitled Silhouettes & Statues: A Gothic Revolution 1978 – 1986, this is a stellar five CD collection featuring artists near and dear to the aesthetic of Strawberry Tongue. With over 80 tracks from well-known to more obscure bands, exquisite liner notes featuring artist contributions, and never before seen images, this is the perfect primer that reads like a compendium of post-punk and gothic music of the era.

Many artists in this collection are already familiar to listeners of Strawberry Tongue. Our playlist regularly includes Cocteau Twins, Joy Division, The Cure, Danielle Dax, And Also The Trees, Alien Sex Fiend and Dead Can Dance. So, you can imagine my delight upon some lesser known bands such as Modern Eon, Tabathas Nightmare, Rema Rema, Neviluxury, Lowlife, Siiiii, Folk Devils and so many others getting their fair share of the spotlight in this tantalizing mix.

The late 70’s were a unique time for music. Punk had blown the reality of the artificial fantasy that the pop and rock world had spoonfed the general public for decades. The grit and grime of every day life became the bedrock from which to draw inspiration. The frustration and anxiety of the political and spiritual landscape of a post-war, post-modern, post-illusion society were splayed for all to bear witness. Artists eschewed all that had been so keenly packaged in pretty pop, sparkly glam, rock ‘n roll excess, and esoteric (and boring) prog rock aesthetics. It was all of this that shattered music into a post-punk, post-everything mirror with a thousand points of light. There would be no turning back, music completely altered and redefined to include bitter honesty and welcome detachment from an unreachable dream of modern day life. These are the first wave goths, coming to claim their rightful place in the monolith of modern music. These are the first wave post-punks who would find themselves continuing to inspire generations of artists after they first blasted on to the scene.

This stunning collection will be released on June 30th. You can pre-order it from Cherry Red. Below you will find a list of all the tracks you will find on this matchless collection. Be sure to tune in to Strawberry Tongue Radio to hear many of these artists on our regular playlist.

This entry was posted in new on str and tagged in cherry red, gothic, postpunk.