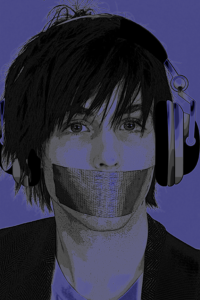 My name is Dawn Marie and I am a fellow Minnesotan, registered Democrat, voter and a fan of your former radio show on AM950 – Air America. I loved your show, where you participated in the democratic process through interviews and commentary on progressive issues that are pertinent in our beautiful state and country. My favorite segment was “Wait, Wait, Don’t Lie to Me” with Judge Conasan. It cracked me up every time. I frequently conjure up the phrase “weasel” when I am confronted with sleazy tactics that are technically truthful, but, are delivered in totally misleading manner. That was truly entertaining radio!

As a citizen, believer in a democratic society, and as a champion of the every man, I am appealing to your radio roots. Let me explain. I am a modestly successful, non-commercial streaming radio hobbyist. Over the last fifteen years, I have maintained two legal broadcasts – right here in little old NE Minneapolis. I have two very unique and niche stations. The first and oldest, focuses on classic jazz, show tunes, crooner, torch and novelty songs from the 30’s, 40’s, 50’s and 60’s. It’s purely delightful. My second station, focuses on a variety of “alternative” and “underground” styles of music that began in the mid-70’s and continues to be inspire new generations. The music styles featured include; punk, postpunk, new wave, electronic, shoegaze, gothic and experimental music. Most importantly, this second station places an emphasis on independent artists who depend on a platform such as this to promote their music to a worldwide market. These stations are far from what you might hear on mainstream radio and yet I have loyal followers around the world including; Japan, Poland, Australia, France, Germany, Scandinavia, Peru, Russia, United Kingdom, Spain, Serbia, Turkey and, of course, the United States and Canada. It gives me incredible satisfaction to be able to continue to share and expose new generations to the artistic and musical communities that are rarely heard from generations past. I guess, I fancy myself as a musical historian and curator.

You are probably familiar with the Small Webcaster Settlement Act of 2002 and the Webcaster Settlement Act of 2009. So am I. I have intimately lived through both of these historic (and stressful) times and rulings over the course of my stint as a radio manager and producer. With the (then) burgeoning new Internet frontier, these laws helped to protect micro-radio stations such as mine to continue to archive our music legacies of days gone by and promote modern, independent artists. These rulings allowed me to continue my work as a musical historian and curator, without the pressure of pushing commodities from major labels or “popular” music trends.

In late 2015, my stations, including thousands of others in the U.S. and around the world, were essentially invalidated, in fact not even mentioned, by the Copyright Royalty Board ruling. This ruling made no exception for the size of the station or the revenue it generates and put micro-casters, like myself, on the same playing field as major corporations such as I Heart Radio, which ironically will be paying artists even less than they did before and their AM-FM terrestrial counterparts pay absolutely nothing towards the artists. Once again, the CRB set the bar so high it becomes a barrier to entry to all but the most major players in the industry. This ruling and new rates grants an anticompetitive advantage to the major labels. The major labels have no interest in promoting independent music and record labels, as they provide choice, and eat into what the majors perceive as their bottom line – or what they are entitled to.

Congress has twice stepped in to “rescue” the small webcaster from this judicial overreach, and yet the CRB allows and promotes anticompetitive practices, and restraint of trade, even after having been legislated against twice previously. It’s mind-boggling that the CRB gets away with what in most business sectors would be recognized as collusion and an unfair method of competition.

The audience that has delighted in the music my stations have delivered over the last fifteen years has no interest in major labels or what is considered “popular” music. Frankly, they wouldn’t give most of the majors the time of day. Maybe, unless Lady Gaga is singing a traditional pop song with Tony Bennett, but, that’s about the end of the line. The audience I serve appreciates my tireless efforts to promote, and celebrate music that spans multiple lifetimes, while uncovering delicious morsels of forgotten and otherwise overlooked music to a worldwide audience. My stations are teeny, tiny in the scope of radio. Working from my little office overlooking my urban backyard, where, if there are not too many leaves on my neighbor’s tree, I have an almost perfect view of the beautiful skyline of downtown Minneapolis. My stations and situation are not an exception to the rule. Thousands of stations around U.S. and the world are in the same boat as I am. We are a diverse group of micro-broadcasters; we promote gothic rock, black metal, classic jazz, techno, soundtracks for Japanese animation, 70’s reggae, lounge music, and in many cases, as my two stations do – establishing and preserving musical legacies for past and current artists. Particularly with our participation to promote independent and forgotten artists, we helping them find new audiences, promote tours and releases, and sell their music on a platform of their choice, helping to foster their musical legacies. The major labels and the CRB are actively opposed to this kind of effort, previously upheld by the Small Webcaster Settlement Act.

Again, as a Minnesotan, voter, Democrat, fan, and a noncommercial webcaster, I am appealing to my Senator and former radio host to help champion a new Small Webcaster Settlement Act of 2016 that will protect micro-broadcasters to continue our work and our passion for music.

Save Net Radio! We Need Your Help To Petition Congress. 100,000+ Stations Will Perish!
https://www.change.org/p/u-s-house-of-representatives-u-s-senate-save-net-radio-we-need-your-help-to-petition-congress-100-000-stations-will-perish

Save Net Radio! – Join us
http://saveinternetradio.info

The Death of Internet Radio – Why Musicians Should Be Furious With The Music Industry
http://www.newjerseystage.com/articles/getarticle.php?ID=6712

This entry was posted in website and tagged in save internet radio, small webcaster act of 2016.