Godspeed You Black Emperor! – Lift Your Skinny Fists Like Antennas To Heaven 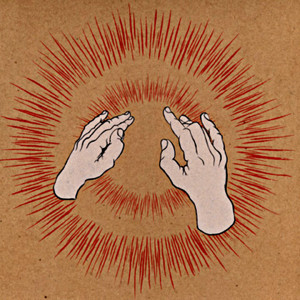 Lift Your Skinny Fists Like Antennas To Heaven is one of the most highly anticipated releases of the year. You probably won’t catch the first single on your local alt radio station or the new video on VH1 anytime soon. There certainly aren’t any singles or videos. The album is a sprawling concoction of understated beauty, simple devastation, apocalyptic rants, soaring strings and climactic reverie. Even if it was friendly enough for radio, it would be a crime to use one song sized piece without the rest. The four songs are each comprised of several different parts, strung together into 18-23 minute epics. For this recording GYBE! consists of no less than nine musicians. Mostly instrumental, the music consists of guitars, drums, horns, cello, violin, field recordings, harmonium, glockenspiel, accordion and piano.

The first track “Storm,” fades in with some very simple guitars, soon to be joined by accordion, cello and violin. The addition of drums is where things really take off. Soaring guitars and crashing drums are joined by a horn and continue to grow until everything comes to an end leaving only a wobbly guitar note. The Third piece of the song, “Cancer Towers On The holy Road Hi-Way” is a sparsely played piano with a barely inteligable religious rant backed by a tension building hum. It is a piece of beauty and sadness.

The first part of the second song “Static,” literally builds from nothing. The lonely sound of a train in the distance comes closer but soon passes, followed by a ringing drone. Part 2, “Chart#3” is a piece used for their appearance on the John Peel show for BBC1 Radio in January 1999. A sad cello plays while a preachers speaks, “When you penitrate to the most high god, you will believe you are mad, you will believe you have gone insane … Oh yes there is many a man and woman who have been put in the insane asylum when this has happened to them, and they’re sitting there today, people think they’re insane, but they saw something that’s real, and they see it when they’re on drugs, only thing is they see it not through the light of god which I’ve shown you, not through the light of god and the understanding of god, because when you see the face of god you will die, and there will be nothing left of you except the godman, the godwoman, the heavenly man, the heavenly woman, the heavenly child there’ll be prayer on your lips day and night, there’ll be a song of jubillee waiting for your king, there will be nothing that you are looking for in this world, excepting for your god.” The song later builds to a heavy intensity of guitars drums and violins, then into a final freak out.

“Sleep” begins with an old man reminiscing about his times at Coney Island as a child and finishes 23 minutes later with a wonderfully uplifting jam called “Locks of Love III.”

Lift Your Skinny Fists Like Antennas To Heaven comes in a cardboard gatefold sleeve on 2 CD’s with an insert addressing the reader as “Dearest THE CITIZEN of falling/fallen world—.”

This entry was posted in new on str and tagged in godspeed you black emperor.